It’s my birthday today so, I declared it a holiday and took the day off from work. Marigold was happy; she got an extra day in the country.

Walking around my property, netted a huge mixed bouquet of blooms. To the left of my farmhouse there are four rows of a camellia specimen garden. No two are exactly alike. I do not know their names and wish someone who could identify them would come and do so. The solid, medium-sized white ones are my favorite. 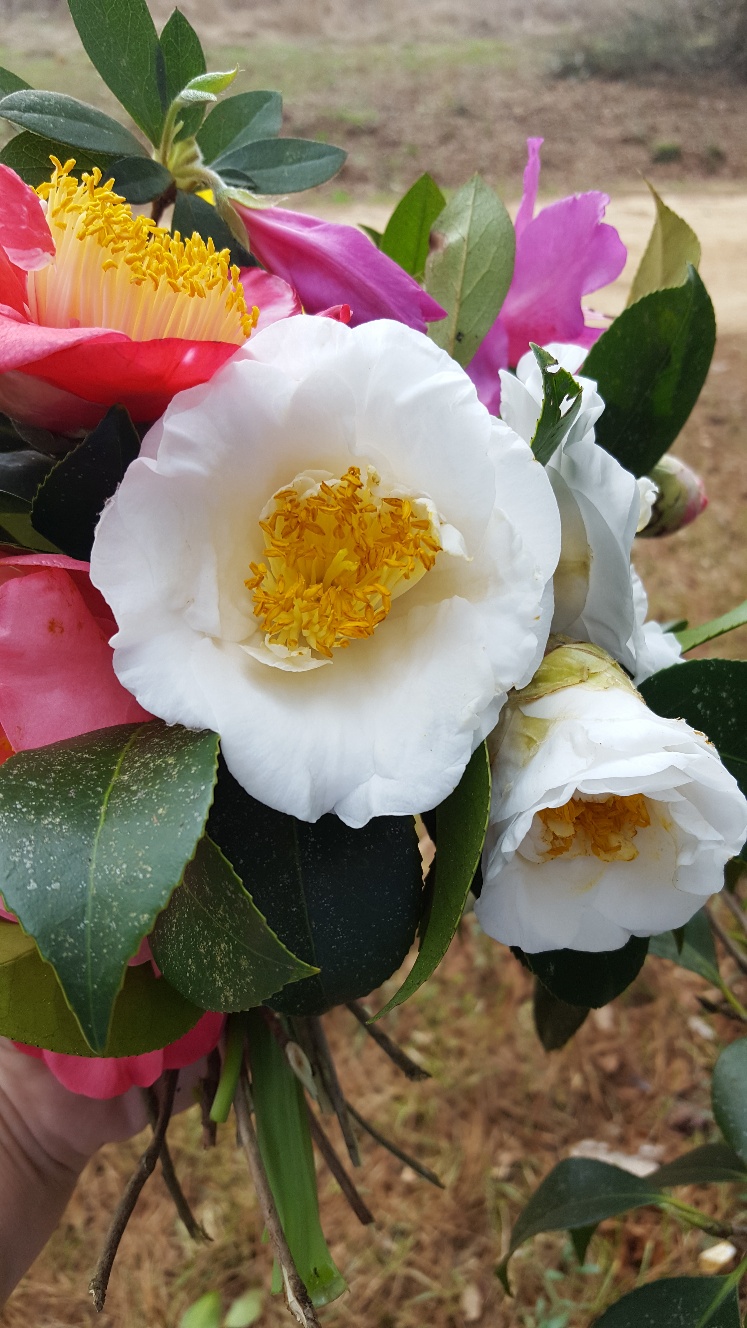 The bulbs that we’re planted last October are all up and blooming. I was surprised to see that, down by the lower, ground-sweeping limbs, the Pride of Mobile azaleas are beginning to bud and bloom.

All the blooms were brought into the kitchen, trimmed and placed in an antique pedestal bowl.

In the remains of the old orchard, one of the Mayhaw trees was abuzz with honey bees. Come one jelly making season.

I’m an easy person to please. My nephew asked me, “You’re  not doing anything for your birthday?”

Just give me a sweet breeze through the trees,  lots of flowers to gather, the songs of birds and the sunshine. That’s all the birthday present I need.

My Birthday Blessings to you. 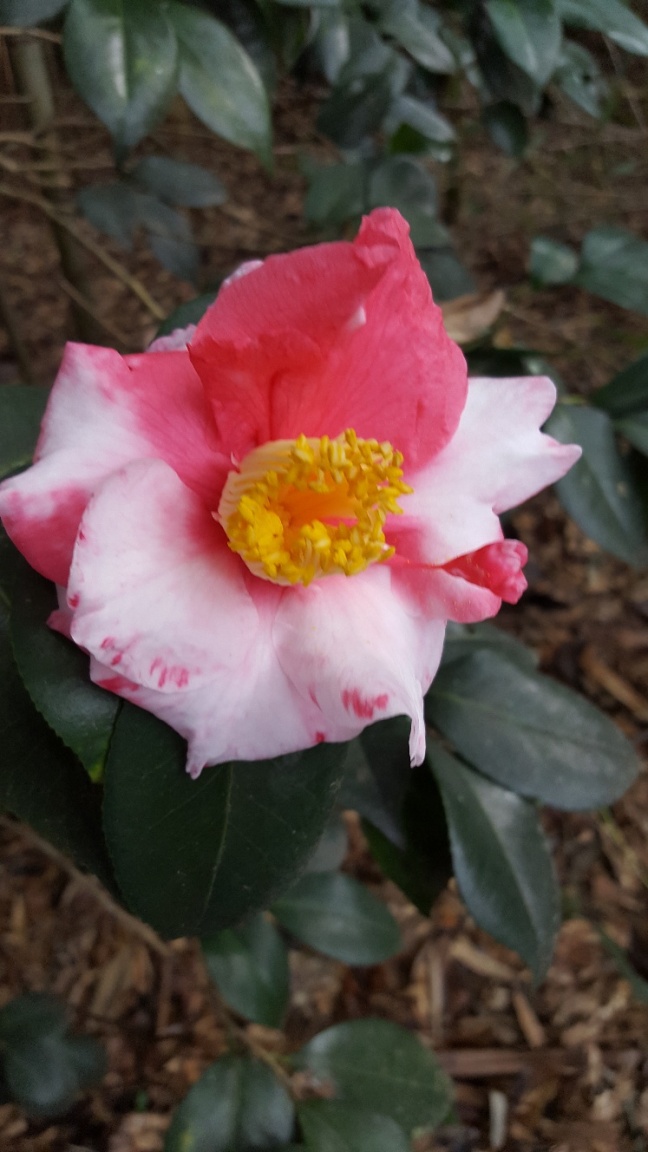 Our church has Mid-week meals to keep attendance on Wednesday up and our members connected during the week. I sat with members from my Sunday small group, ate supper, discussed common concerns for aging parents, re-glazing very old windows, little league and ‘hey, who is that sitting across the CLC?’

When it got to be time for choir, I put my tray up and headed out the door, but a dear friend called out to me.

“Are you really?” She looked at me over her glasses. “Not just saying that?”

We chit-chatted about my children. She told me about her granddaughter.  Then the question came:

“Has that shining knight on his white stallion showed up yet? ”

I just laughed and shook my head and glanced up at the ceiling.

“No, ma’am. Haven’t seen him, nor his squire on a bay gelding! You know, when I tell God that I am lonely,  you know what He tells me to do?”

“What is that?” my friend asked.

“Go for a walk,” I answered. Then I gave her a wry smile. “But I guess I’m walking in the wrong place, ’cause I haven’t met anybody.”

As she always does, she told me that she would pray for me. And she meant it, too. I went on to choir practice.

Here lately, I’ve been thinking about my ideal man. As if there is such a thing. I’m not naive- not anymore. But a woman can dream a little, right?

I don’t really care what he looks like. I married looks first go-round (he’s lost them, by the way). Funny side note: years ago, one night at church, my then husband and I were talking to a gentleman and he said, “Your boys get their good looks from you,” he said to my now ex. In the next breath he continued, “I can see that because your wife still has hers!” Haha!

I want a truly kind man. A tender hearted man. No push over, but compassionate.

I want a man who has read the literary classics or at least something in addition to Sports Illustrated and the Market Bulletin. Not that there’s anything wrong with those publications, but if he could quote a Shakespeare sonnet,  I’d just about forget the rest of my list and give him a chance right away.

Next, I would love a man who could sit down at my antique upright, with the Werlein’s sticker on it, and play me a love song. Oh, honey! Again, musical talent and well read; be still my heart.

Light on his feet. Yes, dancing in the kitchen, after the supper dishes are washed and put away is on my list. And please, he will have to know something other than the loaf of bread. What? You’ve never heard of it? That’s what I called the one dance move the ex had. His arms around my waist, he’d kinda tilt from left to right, as we turned in a slow circle. I’d get dizzy-headed and ask if we could stop and turn to go in the opposite direction. I felt like a loaf of Bunny Bread in his big ole arms! Long loaf. Thin sliced. White bread.

Now, don’t think I want a man with hands softer than mine. The afore mentioned paints a tame picture. Nope, no siree. Rudimentary manly skills in the yard and around the house, if you will. Cutting the grass, unclogging the disposal, fixing a leaky bathroom faucet.  He’s going to need to know how to change the oil in the tractor, too. And if he doesn’t already possess such knowledge, be willing to learn. A well read man shouldn’t mind discovering new things, right?

A Renaissance Man! Yes! Renovating an old house has made me appreciate men with a certain skill set. Youtube’s great for garnering knowledge, but watching a man work- one who knows what he’s doing, especially-  live and in person, well…

But none of the above will do, without the most important trait and character anchor: my ideal man must be a man after God’s own heart. A true man of God, not just a pew percher.  A true disciple of Jesus, not just someone who knows enough Scripture to misuse. A man who can swim down deep in his faith, never be content to splash only up to his ankles in the shallows. Yes, a lover of God more than he would ever love anything  or anyone else.  Including me.  Deal breaker, if he doesn’t love God and honor Him by keeping his life holy.

Deal breaker. First there’s got to be a candidate. Like I told my friend; I haven’t seen a knight on a white stallion nor is squire on a bay gelding. But I have seen the One who loves me best and I am content with Him.