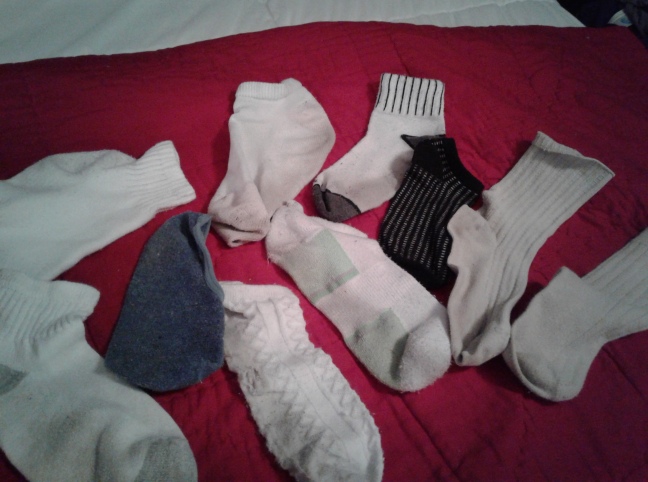 Yesterday was a little known holiday -not recognized by bank and post office closures- called National Lost Sock Memorial Day. I heard about it on Supertalk MS. I immediately found an emotional connection to all the mismatched or single socks in the world. I know just how they feel. NLSMD will forever rank up there with that other single awareness holiday: Valentines Day. Ugh!

With an adolescent bloodhound in the house, who has a thing for chewing on socks, the problem of matching them has become a daily chore. They may make it into the washer at the same time: might even make it into the dryer, but she stands at the dryer door, waiting for me to turn away for a second and off she goes with one to hide and chew on, till it’s no longer wearable. (Excuse the run on sentence.)

This morning I once again found myself digging around for two socks that matched. I’ll admit that some mornings I just don’t care and put on whatever comes close. 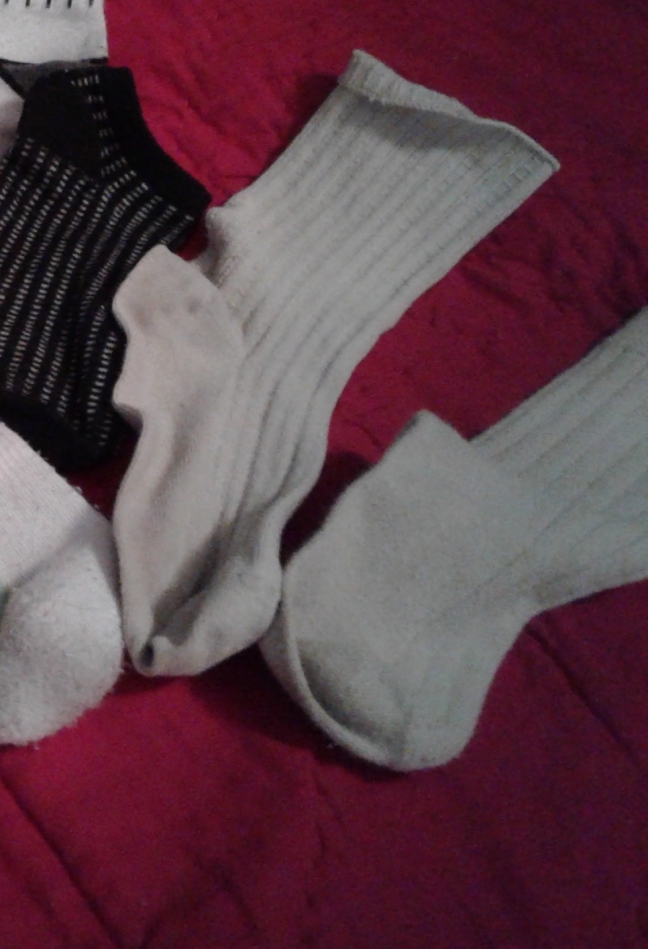 Now, these two at first glance looked like they matched. Same color and size , but the patterns aren’t alike. Oh, well. To celebrate NLSMD one is suppose to dispose of any single socks lying around or shoved to the back of the dresser drawer.  Again, feelings of single awareness collect, like lent from the dryer.

I’ve been divorced now for over two and a half years. Just beginning to think about dipping my toe into the dating pool. But my gosh, it’s been a long time since I’ve done that! How do you start? How do you go about it, in this day and age? It’s scary to think about.

However, I recently met a fella that I found myself thinking that I wouldn’t mind matching and folding his socks. Feeling, oh I don’t know, I hesitate to say domestic. My grandmother’s South Louisiana, East Feliciana accented voice is in my head right now. She would have described him thusly: he’s a tall drink uh wohtah, with a nice smile that reaches his eyes. I describe him as having a voice that I could crawl up in and stay all day; like a tree house built in the top of a big oak limb, looking out over a deep and slow moving river. Yep. He nerded out explaining something to me and I thought, man, please hush! I could cook for a man like that. Something good on all four burners and both ovens.

And we met on Valentine’s Day- ain’t that ironic?!

But he’s two counties away. This single sock is still that. Single. Lyle Lovett is coming to Thalia Mara in August, I would love to have a date to go. But as I said in the two paragraphs up, starting from scratch is paralyzing me.

NLSMD and Valentine’s Day are equal in my book.

I will not throw out my single socks. My tomatoes need tying up and I will just repurpose the unmatched sock collection.